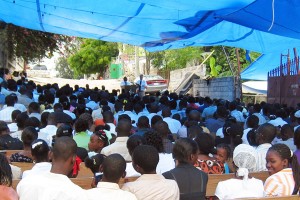 I was sitting up in front of Pastor Diogene’s Port-au-Prince church last Sunday, May 23.  As I looked out over the crowd, I recognized very few of the people there.  The last time I had been to Haiti was before the earthquake, and then I had known many of the members of this body.  Since the earthquake many of those had gone back to their home villages, but they had been replaced by new faces.  Before Diogene introduced me to get up and preach, he asked the congregation how many of them recognized me.  Very few raised their hands.  The benches were full, several people had brought their own chairs, and well over 600 new believers were gathered to hear God’s Word.

They were gathered out on the street in front of what used to be the Ebenezer Baptist Church building.  That building is now just a pile of rubble – but the church, God’s chosen people, the followers of Jesus Christ, were alive and with open hearts anxious to hear what God’s Word would teach them that day.

The church service was scheduled to start at 7:30 AM.  We arrived then but found only a handful of people there.  A few were working to get electricity to the sound system – I heard some pops and saw some flashes as wires shorted out.  The sound system would remain silent until they completed their task, and the neighborhood people wouldn’t know it was time for church until music flooded the area. 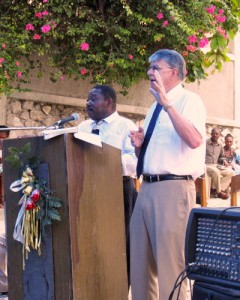 Pastor Diogene (left) translates as Bernie preaches to a congregation of 600, many who have come to Christ since the earthquake in January

A few other men were hanging the last of the blue tarps that were used to keep the sun off the people.  They anchored ropes to nearby walls or trees, which suspended the tarps above the makeshift auditorium.  There were a few tears in the tarps, but most of the people knew where to sit to avoid the direct sun coming through those holes.

Music began to fill the neighborhood around 8:15, and by 8:30 the place was packed.  As each individual and family arrived, they added their voices to the chorus of worship, and the music grew steadily louder.  And most of those there were singing praises to their newfound Savior and Lord.  It was a joy and a privilege to be there and worship with this body of believers.

During the introduction of visitors, a young mother stood, introduced herself and her baby, and told the people that she had come that morning because she wanted to become a Christian.  The 600-plus immediately broke out into huge applause and along with the angels in heaven welcomed another found soul into their body and into the Kingdom of God.  Diogene reports that there are people being added almost daily – God continues to use the disaster of the earthquake to open the hearts of these people.

These new believers are among those whom we have had the privilege of providing food for the past four months.  As the service ended these new brothers and sisters came and showered me with thanks for what we have been able to do for them.  And I pass that gratitude on to you.  Your support and partnership with us has truly made an eternal difference in many lives.  We thank God for you!

We have begun to slow the food distribution as many are now able to provide for themselves.  Our goal is to phase out this part of our earthquake relief effort over the next couple of months.  Pastor Diogene and Garry Charles (our family sponsorship administrator) are now evaluating the needs of the homeless and prioritizing the house-building phase of the relief.   Please continue to pray – for Diogene and Garry, for the recipients of the houses, and that God will use this phase also to further His Kingdom!