by Philip Bovenkamp
on September 4, 2010 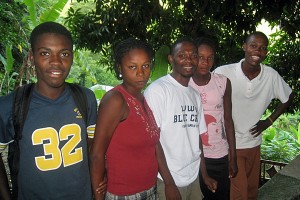 Edner (center) and four of the older orphanage children.

In Haiti, every student must pass a standardized national test each year in order to move on the next grade level. The results of last year’s test were released recently, and every child in our orphanage passed the test.  This is unheard of in Haiti where it’s not unusual for some students to remain at one grade level for several years before passing the test.  In our orphanage, we’ve never been close to 100%.

So what was the difference this year? In 2009, Edner Destima became the new Administrator/House Father of the Starfish Ministries orphanage.  He has been wonderful for the children, and their newfound academic success is just example of the impact he has made.