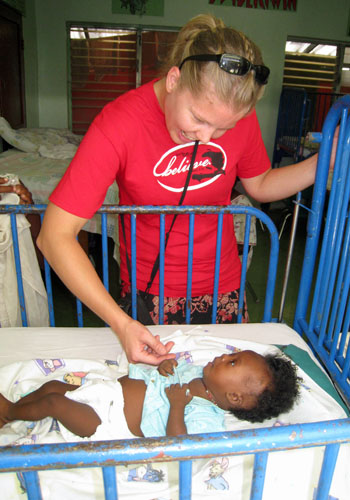 Aimee Thomas greets a baby at the hospital in La Pointe

The team from Grace Community Church in Auburn, Washington, met early this morning for a breakfast of pancakes made by Bernie (something you can only experience in Haiti).  After breakfast we set out for La Pointe, a two and a half hour trip north.  There is a hospital in La Pointe that is run by the Union of Evangelical Baptist Churches of Haiti, an organization that Starfish Ministries partners with on occasion.  The team spent time at the hospital touring the facility and interacting with patients and staff.

After returning to Tricotte, the team split into two groups.  One assembled bags of food that will be distributed by local churches in some of the poorer villages in the area.  The other group built benches that will be used by another church.