On Thursday morning the team from Grace Community Church headed for Peliter, a village that is home to one of the Starfish Ministries schools.  Across the road from the school is a church where the team set up a projector and a screen and blocked out the windows with dark fabric, creating a temporary movie theater.  Then we invited the children from the school to join us for a screening of the Jesus Film.

After watching the film, Pastor Diogene asked the children if they thought it was fair that Jesus was punished like he was.  They responded that no, it was not fair.  So he explained to them that Jesus had taken their punishment, so that they would not need to be punished for their sin, and could spend eternity in Heaven with Him instead.

Then he asked how many had made a decision to follow Jesus.  The majority raised their hands, but one young girl, perhaps 14 years old, did not.  Diogene asked her if she would like to trust Jesus, and she said she would.  She came forward, and the team gathered around her and prayed with her. 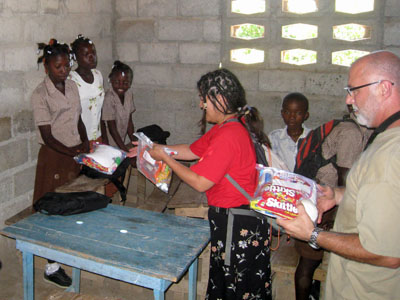 Later we found out that her father is a witch doctor, and her family is heavily steeped in voodoo.  It’s difficult to say how her family will respond to her decision — they may throw her out.  But Pastor Diogene has already taken steps to support her through whatever happens, using the pastor of that local church and committing to stop to check on her regularly himself.

After packing up the projection equipment, the team went across the road to the school where they handed out gifts that had been prepared for the school children by North County Christ the King Church in Lynden, Washington.  Each student received a package that included school supplies, small toys such a stuffed animal or a doll, candy, hair accessories, and other items.  Then we drove to the Starfish Ministries school in the village of Ravine and distributed gifts to the children there as well.

All tolled, nearly 250 children received gifts today, although none received a gift so great as the young girl who received eternal life when she met her savior today for the first time.